It is a common belief that in the scene in John 20 in which Jesus shows his wounds to Thomas, Jesus is chiding Thomas when he says, "Blessed are they who have not seen and yet believe." I've come to the conclusion that this is false. Thomas is an apostle, that is, an eyewitness. He has to see in order to be an Apostle. Our faith is based on the witness of the Apostles, so if they aren't witnesses, then how can we base our belief on their witness?

This passage is, in fact, establishing the bona fide of the apostolic witness by highlighting that Thomas and the other Apostles did see. Even Paul is an eyewitness of the resurrected Jesus, and hence an Apostle, though not one of the Twelve. And, of course, Matthias was selected because he was an eyewitness.

I wonder if anyone has done a study exploring why St. Thomas is so important in the Gospel of John.  He appears several times.  In the scene when Jesus starts towards Bethany to heal Lazarus, he says, "Let us also go, that we may die with him."  At the Last Supper he asks, "Lord, we do not know where you are going; how can we know the way?" To which Jesus says "I am the way, and the truth, and the life; no one comes to the Father, but by me. If you had known me, you would have known my Father also; henceforth you know him and have seen him."  And, of course, Thomas is the one who calls Jesus "My Lord and my God" directly. Finally, he appears on the shore of the sea with Peter, Nathaniel, the Sons of Zebedee, and two other disciples in the "coda" in Chapter 21.

Personal devotion to the Blessed Mother

We are meant to have a personal relationship with the Blessed Mother beyond the rich liturgical life of the Church, which includes the many feasts and solemnities, not to mention the various mentions of the Blessed Virgin Mary in the Mass and other liturgies. This principle applies to the images of the Blessed Mother that invoke our spiritual affection. That which moves me may not move another. It has to do with what image Providence has made the medium of a more personal relationship. 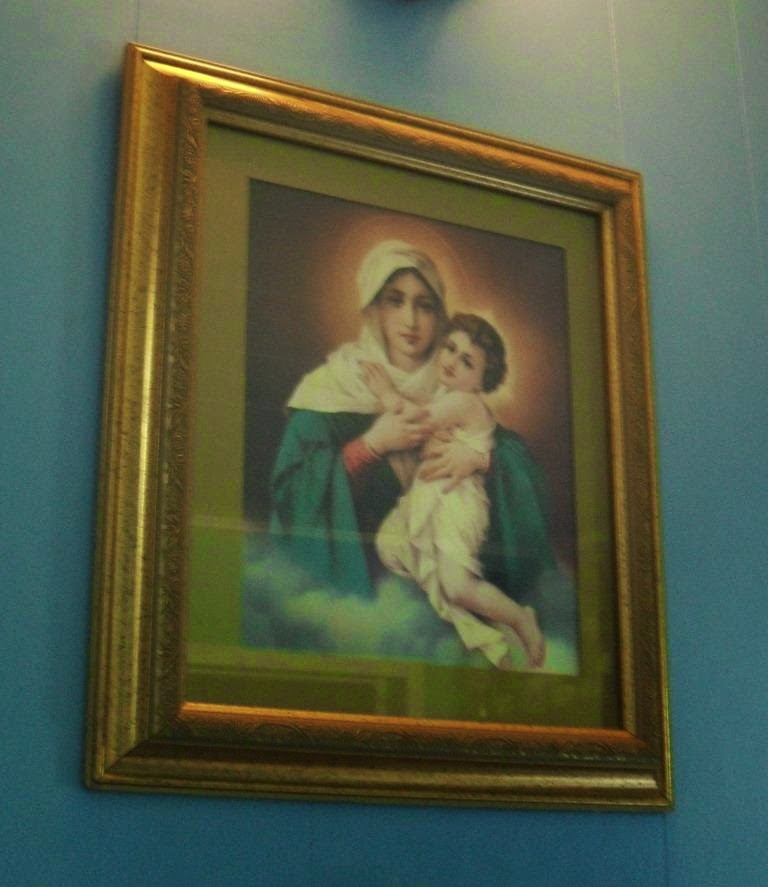 Our family is heavily involved in the Schoenstatt movement, which is very Marian. Their preferred image of Our Lady is the Mother Thrice Admirable to the left. Even Schoenstatt people admit it isn't great art, but it is the image that was given to them by Providence to put in the original Schoenstatt Shrine in German.  Now all the dozens and dozens of shrines in the world have them, not to mention every Schoenstatt home. We have several scattered throughout the house. 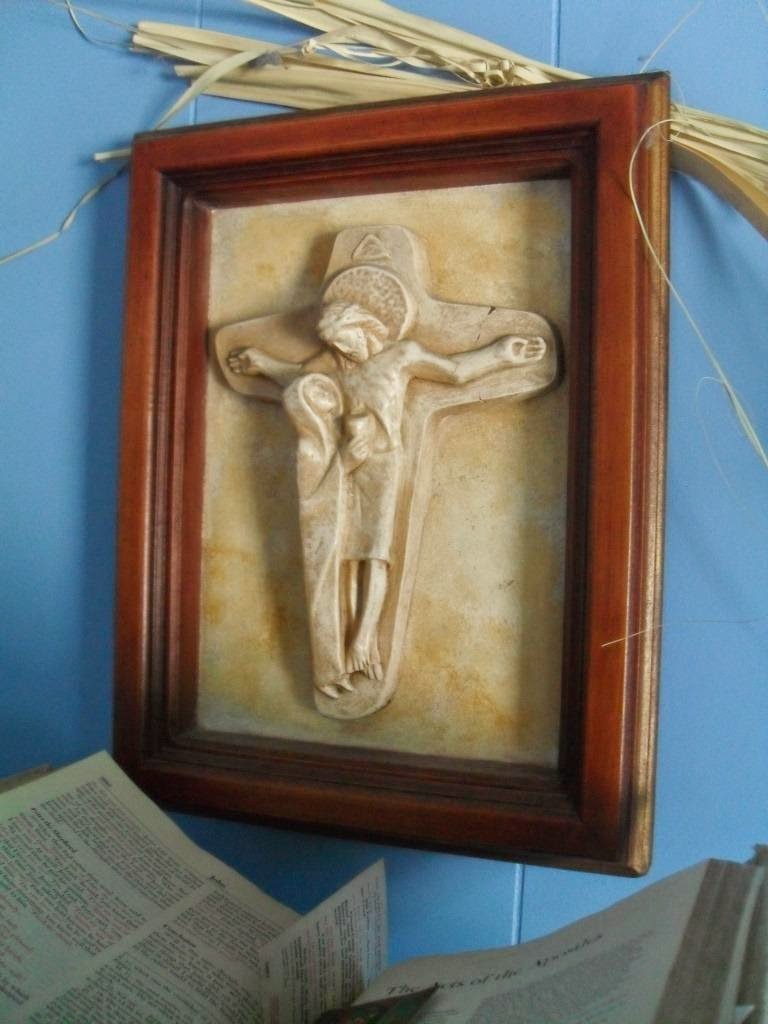 I have never developed a warm affection for the MTA. The Schoenstatt image that moves me more is called the Unity Cross, which was designed in Chile. It features Our Lady at the foot of the Cross holding a chalice to receive the blood and water that flows from the side of Christ. The idea of the blood and water flowing from the side of Christ is significant for my spirituality because of its connection to the Sacred Heart, which is the title of Jesus that has the longest and deepest history in my life. When I pray at home I either look to the image of the Sacred Heart that you see to the left of my posts at the top of the blog page or to the Unity Cross. They are both in our living room, as is the Mother Thrice Admirable picture above. 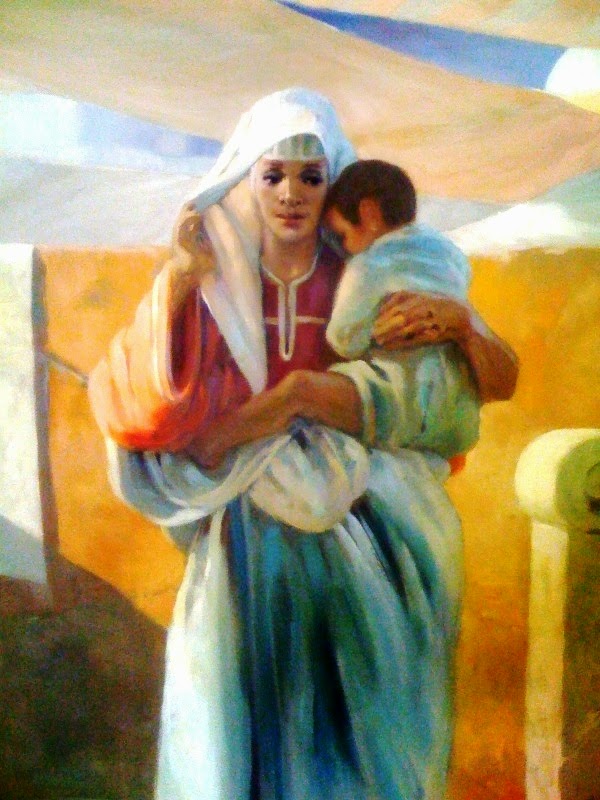 When I was teaching theology at Sacred Heart School of Theology, I dedicated one Lent to increasing my personal devotion to Our Lady. At that point I began the practice of never approaching the altar of our Lord unless "accompanied" by the Blessed Mother. This idea came from the Unity Cross, but in practice before going to my pew I would venerate an image of the Flight Into Egypt that was in the back of the chapel at SHST. I have nothing to say about the artistic value of the terra cotta bas relief, but the image itself reminded my of my own role as father--protector of the Mother and Child. I don't have a photo of that one that I can find. Left, though, is another picture that is in the Immaculate Heart of Mary chapel at SHST. I've always liked this one artistically. 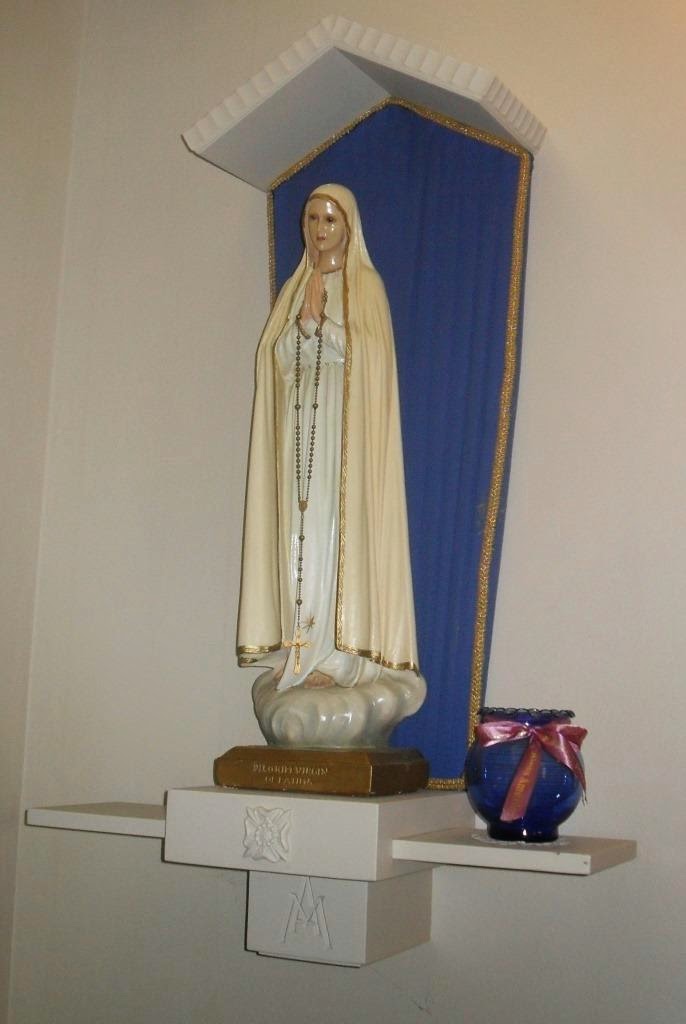 The image that has come to mean the most to me, however, is a statue in the St. Joseph chapel at St. Martin of Tours parish in Franklin, WI. We attend daily Mass there most days. Not great art, perhaps, but I have come to have a warm affection for her when kneeling before this image, or lighting a candle in her honor. It has become THE Blessed Mother for me--the focus of my personal relationship. My wife says it is Our Lady of Fatima.  I don't know. I have no particular devotion to Our Lady of Fatima, although one of my favorite saints, John Paul II, did. This is where I go to find a place of rest for my weary soul.

Then, of course, there is this, which does mean a lot to me.