I remember when the Feast of Divine Mercy was first instituted by Ven. John Paul II Kevin Miller complained that putting the feast on "Low" Sunday disturbed the integrity of Easter Week, which had its own very clear liturgical identity. Low Sunday was the Eighth Day. It was the completion of Easter Day, the focus of which was the Glorious Resurrection of Jesus, not the particular effects the Paschal Mystery has for us here and now. Mercy Sunday seems to put the focus back on us, rather than on the Risen Jesus. It might make for sense, for instance, to have feast the Sunday after Low Sunday.
Setting aside the question of what Our Lord said to St. Faustina, I have an idea about why we can't wait. John Paul II saw so much of the horrors of the Twentieth Century first hand, I have a feeling that psychologically we can't wait to hear about God's Mercy. That is what we need to hear so desperately. That hit home for me especially this year. Not only is the Church going through a particularly trying time right now, but I've also recently been made more keenly aware of some of the deep personally suffering of people I know. I'm all for the joys of Easter, but this year, I'm more for turning to the Crucified and Risen One for mercy. Perhaps John Paul II felt the same way. Psychological our time is so wounded, so under attack, so down for the count, that almost all we have left is a cry for mercy in the face of enclosing darkness.
Domine Jesu Christe, fili Dei, miserere nobis!
Posted by Robert Gotcher at Saturday, April 10, 2010 0 comments

Latin joke from one of my kids

"Rex gladium habet. Rex gladium Costello."
Get it? It only makes sense in ecclesiastical pronunciation.
Posted by Robert Gotcher at Thursday, April 08, 2010 1 comments

Everyone talks about the polarity that plagues church life in America and throughout the industrialized west. I've spent a lot of my adult life trying to figure out what is behind this polarity. My friend, Kevin Miller, usually refers to Gen. 3 when I ask this kind of question. Some people will simply say that the polarity is not only regrettable, but unnecessary, caused by defects in those who promote the division. This may, in fact, be true in many cases, such as tensions over the Ordinary and Extraordinary form of the liturgy. The Church's policy, including that of Pope Benedict, makes it clear that the OF is not only "valid," but is rich, if celebrated properly. I am writing a book right now to show the richness of the OF.
On the other hand, some of the polarity is in fact a result of real, unresolvable differences in which one side can be said to be right and the other wrong. Contraception is one instance. There is no way the Church will ever allow contraception qua contraception as a valid component of the marital act. Too much magisterial ink has been spilled to the contrary since 1930. And the theology of the body of John Paul II has pretty much put a nail in the coffin of "exceptionalists."
I was reminded of this polarity when reading Rodney Stark's God's Battalions, a very intriguing attempt to distinguish the truth about the Crusades from the "black legend" about them which dominates much scholarship and almost all popular sentiment. When he is addressing the true motivation for the crusaders, which he says was genuinely religious, he makes a distinction between the Church of Power and the Church of Piety.

The Church of Power was the main body of the Church as it evolved in response to the immense power and wealth bestowed on the clergy by Constantine. It included the great majority of the priests, bishops, cardinals, and popes, who ruled the Church most of the time until the Counter-Reformation set in during the sixteenth century. In many ways the Church of Piety was sustained as a reaction against the Church of Power.

Singing in the Rain

Many people think of Singing in the Rain as a family movie. Considering such content as this, does that make sense? I understand the part this sequence plays in Don's decision about Kathy, but how old do you have to be go "get" it and get beyond the steamy nature of the thing? Opinions?
Posted by Robert Gotcher at Tuesday, April 06, 2010 5 comments 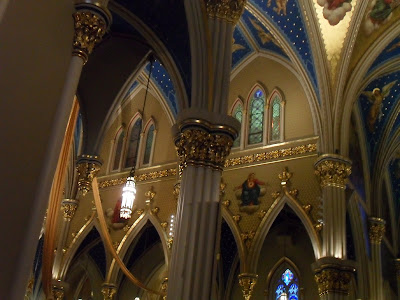 We spent much of the Triduum at Notre Dame participating in the celebrations at the Basilica of the Sacred Heart. This is one of the most beautiful Churches in the world (Okay, I haven't seen a lot of the Churches in the world, but I don't know how you can argue the point.). At the four services we attended, we sat in four different seats, so got four different perspective. Each perspective gave us a new banquet of beauty and symbolic depths to feast upon. 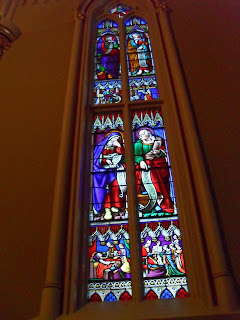 The Liturgical Choir and the Folk Choir pulled out all the stops (I'm sure literally), accompanied by the brass, strings, tympani, cymbals, and bells. My favorite hymn that they sang was "This is the Feast of Victory for Our God," sung to the beautiful tune called "Festival Canticle" (Arthur/Hillert).
The whole experience reminds me of Psalm 150. 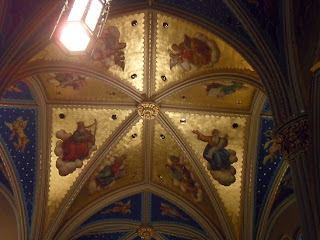